Tim Buck suffered a massive heart attack while dancing with his wife, Fatima, at an outdoor public event in Coon Rapids this summer. Thanks to the work of volunteers and the local authorities, Tim was revived, has received bypass surgery and is now returning to health. We found out about Tim’s situation via Facebook. After a brief interview, we recognized the need, prayed and launched into action. T2NL provided financial assistance to Tim and Fatima to establish a new home as well as some additional funds to set up the place. Thanks to some generous folks for being moved by their situation and deciding to share with those having less. 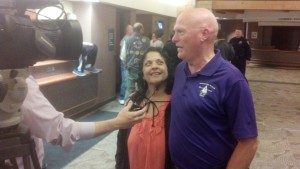