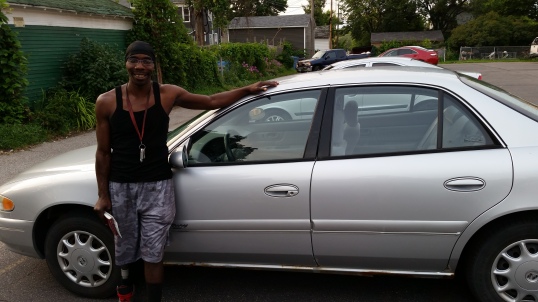 Through several connections, our ministry provided a car to our client Tyrese. He was wounded in the Gulf War but isn’t content to live on disability. As a matter of fact, he seems not to recognize that he has one. Regularly Tyrese holds down two or three jobs including running his own one man cleaning service.

When the transmission went out in his last vehicle, we launched into action. Through several connections we met Annette at Beyond the Yellow Ribbon (http://www.beyondtheyellowribbon.org/). She put the word out in their network and located a generous donor willing to part with their car for the cause.

What a blessing! I never get tired of seeing how God works and enables His purposes to be fulfilled. We’re grateful to Annette and Beyond the Yellow Ribbon as well as the donors for the heart to give. Tyrese was elated and hopes someday to give back as he has been given to.